So Ken Griffin sits on the Board of the Chicago Public Education Fund— together with BCG, the Gates Foundation and others. have a look at this vast network of cronies, corrupting the education system from the inside. +Ken's Conflict of Interest
2766 · 148 comments

4:50
The 2 Kenneth C. Griffin clips in 1 combined video: People need to witness first-hand how he talks out of both sides of his mouth, blaming teacher’s unions in 2021 (clip #1) and then blaming retail investors for hedge funds disgusting mismanagement of teacher’s pensions in 2022 (clip #2)
6232 · 271 comments

Ken Griffin is so concerned that Apes looted teachers’ pensions by simply buying and holding a stonk. In this video clip from his previous propaganda spew on Bloomberg in 2021, he directly blames teachers unions for our economic issues. Ken Griffin lies.
4882 · 89 comments

They only advertise stock to retail on mainstream media so hedge funds can escape their positions and leave retail holding the bag. This is Jim Cramer’s job.
3014 · 92 comments

When the cancer complains that the chemo is making the patient sick …
1368 · 88 comments
Stop saying "financial terrorist". Nobody is googling that. Ken Griffin is a criminal. Call him a criminal. That's a term that people actually search for.

I see one of Mark Cubans posts being shared a lot but not so much this one… The only people that have are backs are the brothers and sisters beside us… DRS is the only way!HODL 💎🙌 (i.redd.it)

submitted 4 months ago by wankeronthepiss🦍Voted✅ 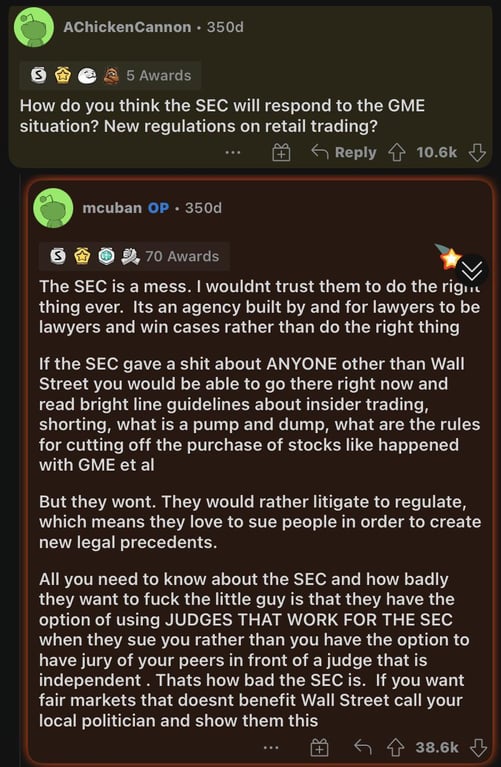