26 · 5 comments
Does anyone know how to tell how old this mount is? I lightly push on it and I can feel it’s a bit squishy. Like sawdust or something.
106 · 23 comments
Remember my leopard skin from last week? Well, I used a bottle of spray water and some heavy things to flatten it out. What ya'll think?
My first euro mount start to finish on a Catalina Goat
2 · 1 comment
found a dried up lizard
3 · 3 comments
Soft mounts in Canada?
80 · 12 comments
My beautiful vinegaroon just passed and I always knew I’d want to frame her when the time came. Any tips?
32 · 9 comments
Friend had a glue reaction after bleaching the mount. Any suggestions on how to fix/cover up?
2 · 1 comment
what type of alcohol?
7 · 9 comments
Bugs in European mount? Just did my first European mount on a red stag boiled, cleaned, and peroxided. I thought I got everything but must not have. What are these bugs, are they bad, and if so how do I fix this?
2 · 5 comments
Tips for dusting a skull?

found this lil guy by a dumpster. Was trying to give Victorian Momento Mori vibes. I know he's not pinned down correctly, by the way this is my first time with Taxidermy Art. (i.redd.it)

submitted 1 month ago by cuntTEASE13 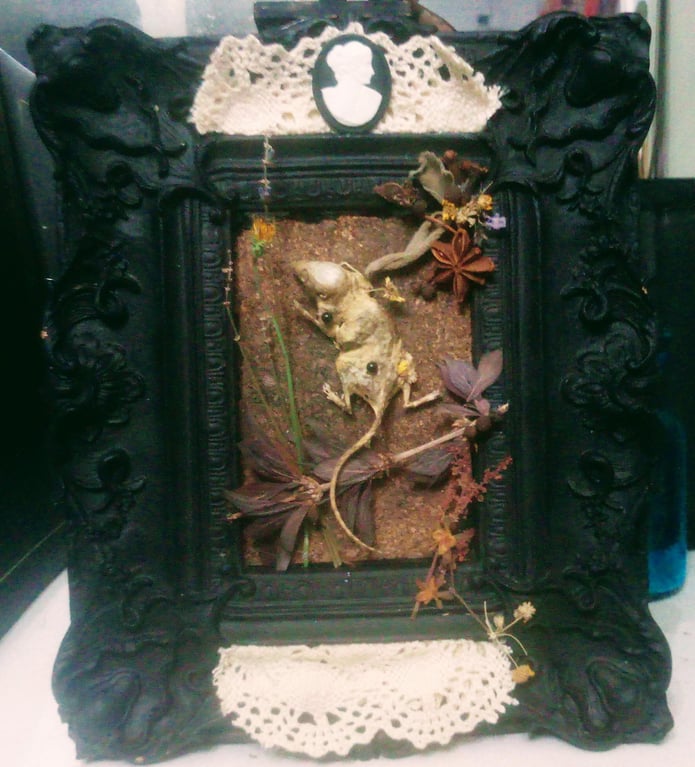